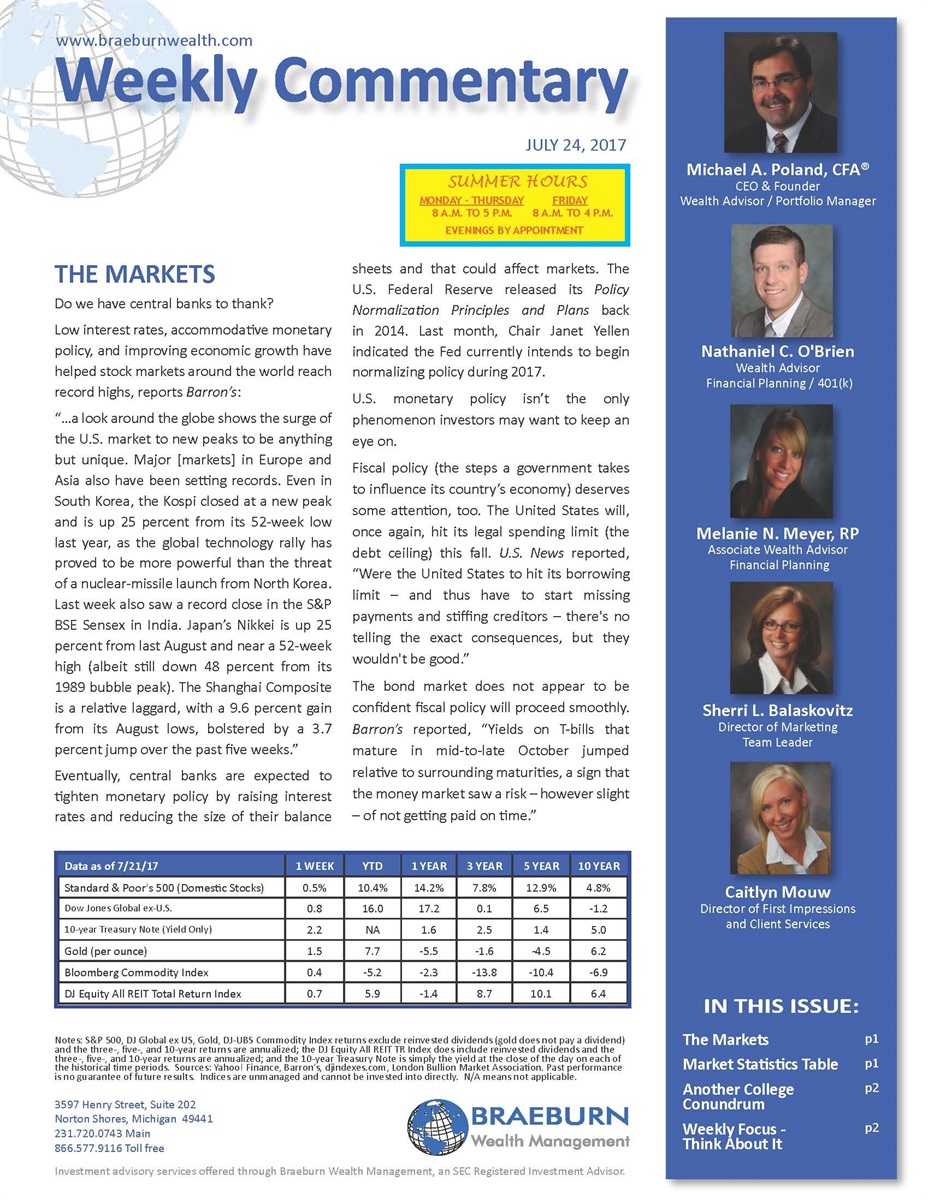 Do we have central banks to thank?  Weekly Commentary for July 24, 2017

“…a look around the globe shows the surge of the U.S. market to new peaks to be anything but unique. Major [markets] in Europe and Asia also have been setting records. Even in South Korea, the Kospi closed at a new peak and is up 25 percent from its 52-week low last year, as the global technology rally has proved to be more powerful than the threat of a nuclear-missile launch from North Korea. Last week also saw a record close in the S&P BSE Sensex in India. Japan’s Nikkei is up 25 percent from last August and near a 52-week high (albeit still down 48 percent from its 1989 bubble peak). The Shanghai Composite is a relative laggard, with a 9.6 percent gain from its August lows, bolstered by a 3.7 percent jump over the past five weeks.”

Eventually, central banks are expected to tighten monetary policy by raising interest rates and reducing the size of their balance sheets and that could affect markets. The U.S. Federal Reserve released its Policy Normalization Principles and Plans back in 2014. Last month, Chair Janet Yellen indicated the Fed currently intends to begin normalizing policy during 2017.

U.S. monetary policy isn’t the only phenomenon investors may want to keep an eye on.

Fiscal policy (the steps a government takes to influence its country’s economy) deserves some attention, too. The United States will, once again, hit its legal spending limit (the debt ceiling) this fall. U.S. News reported, “Were the United States to hit its borrowing limit – and thus have to start missing payments and stiffing creditors – there's no telling the exact consequences, but they wouldn't be good.”

The bond market does not appear to be confident fiscal policy will proceed smoothly. Barron’s reported, “Yields on T-bills that mature in mid-to-late October jumped relative to surrounding maturities, a sign that the money market saw a risk – however slight – of not getting paid on time.”

If you have questions or concerns about your investments contact us at 231-720-0743.